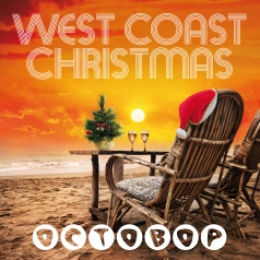 Despite 14 years and 4 CDs since Octobop first appeared, people have asked for yet another recording. Some people close to the band suggested we do a Christmas album. The only problem is that no one in the band really likes Christmas music. So we decided that if Octobop was to jump into this fray, then we needed to do Christmas music our way. All the arrangements were done by band members – Jack, Randy, Brian, and me. Constrained only by our ability to play the charts, we ended up with a pretty eclectic mix. The charts run from the humorous and fun to serious to just plain out there.

Line for Santa is a mashup of two tunes – listen and figure them out. Santa Baby sets the groove. Christmas Time is Here and The Christmas Song had to be included because of their jazz heritage. Jerry Mendelbaum is a twist provided by comedian Allan Sherman. Bernie's Bells combines a west coast jazz standard with a traditional Christmas tune. It Came Upon a Midnight Clear is recast as a jazz waltz. Carol of the Bells seems to come out of a Jazz Crusaders bag thanks to Randy. Jack found a beautiful Brazilian carol, Filho de Papai Noel, that once we heard it, had to be included. Angels We Have Heard On High gets a fun treatment from Brian. Saturnian Sleight Ride, in theory, isn't a Christmas carol, but sleighs are part of holiday tradition. Besides Saturnians only get to listen to Christmas music every 29.4 earth years, so we should give them something special.

Taking Christmas warhorses and recreating them in the Octobop way has been creative, fun, and rewarding. We hope you like it. May your holidays always be cool.

Dedication - A month after we recorded this, Roddy Magallanes, our drummer, passed away after a long battle with cancer. Both Roddy’s talent and personality gave a lift to the band that made this group the best Octobop ever. This work is dedicated to him and his family. We miss him.

West Coast Christmas – The Inside Story

What You Didn't See in the CD Insert

After some resistance, we decided to do a Christmas CD. A few years had passed since the band's release of Very Early and it was time to do another release. We had a few not-so-successful attempts at trying to find a list of tunes for the CD as well as a time and place to record it. Nothing seemed to come together artistically that the group was satisfied with. A Christmas CD seemed like the right solution. It was focused from a song choice and we could have some fun with it.

The real inspiration for this recording came from two of the greatest Christmas albums ever made – The Ventures Christmas Album and the Dr. Demento Christmas Album. Please don't get us wrong, we all love the holidays. It's the same old songs sung by a country music singer or some aging rocker blaring through the sound systems at the Wal-Mart that are the problem. The Ventures (the surf guitar group in case you slept through the 60s) take

Christmas songs and not only give them a distinct Ventures sound, but they also mashed up some of the best rock and roll cliches of the day into the tunes. A certain amount of creativity needs to be present to use the intro to Wooly Bully as the same for Santa Claus is Coming to Town and to tag the start of Tequila onto Frosty the Snowman. The album may be too subtle for most listeners. Dr. Demento is just pure fun. With selections like Bob and Doug McKenzie giving us the 12 Days of Christmas to Stan Freberg doing Christmas Dragnet, you get the idea. 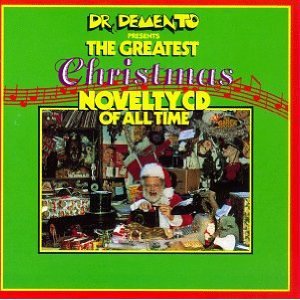 This recording had to have the Octobop stamp on it. We decided that we needed to write all the arrangements. The only restriction was that the charts needed to be playable and appealing to an audience. Jack, Brian, Randy, and I came up with the arrangements. While they can be different, they still show the various dimensions of the band.

Line for Santa starts off the CD. A jazz fan should recognize that this is a mix of Santa Claus is Coming to Town and Line for Lyons by Gerry Mulligan. I don't know if Gerry planned it that way, but it works well. The arrangement starts off with the melody of Santa Claus is Coming to Town on top of the Line for Lyons chord changes and rapidly evolves in to three-line counter melodies. (Thank you, Bill Holman.) The ending is pure Mulligan. Jack Bowers sent me a note when hearing the tune - “Somewhere, Gerry must be grinning from ear to ear (Jimmy Lyons too)!”. We hope so.

Who would have guessed that Charlie Brown, Linus, Lucy, and the gang would be a permanent part of Christmas? Vince Guaraldi gave us the classic Christmas Time is Here. Jack's arrangement and Jon's trombone give this version the simplicity and elegance it deserves.

There really isn't a Christmas tune called Jerry Mendelbaum. Pretty unlikely. Allan Sherman did a parody of God Rest Ye Merry Gentlemen and we just borrowed the title and nothing else. It has sort of a funky, Blues March kind of drive.

Filho de Papai Noel comes from Brazil. We aren't really sure of the origins, but once Jack brought in this chart, we loved it. A nice bossa, highlighted by Jon's trombone solo, we may be able to use this year-round. The stories of trying to wrestle the flute part to the ground will be told another time.

Bernie's Bells is another Ventures-like take on Jingle Bells. Much of the arrangement is inspired by the Gerry Mulligan hit Bernie's Tune. Jack came of with some interesting chord changes to replace the rather boring ones in Jingle Bells that proved to be challenging for us. The ending goes buy pretty quickly but if you listen closely, you will hear the last two bars of Tadd Dameron's Good Bait. I have no clue what that has to do with Christmas, but I have always liked the lick.

It Came Upon A Midnight Clear features Matt doing a jazz waltz. I think people waltz at Christmas. Again, Jack's underlying arrangement uses harmony that you won't find in the carol books. After solo section, you'll hear a fugue-like section that sets up the ending. I think there a fugues during the holidays as well.

The Christmas Song gets an understated one time through treatment by Jack. No improvised solos, just some great new harmony. Maybe Mel is smiling as well. I think Jon is channeling Dick Nash or Carl Fontana on the bridge.

Brian brought in the arrangement to Angels We Have Heard on High. It was quickly dubbed Angels Have Heard That We Are High. Brian's sense of humor shows through on this. Any tune whose most memorable lyric is “Gloria in Excelsis Deo!” needs to have a special beginning. The line that Matt plays on alto is courtesy of Harry Belafonte and the Banana Boat Song - “Day-O,...”. You now get it. The chart continues through a few variations and finally ends with a tribute to one of the essential ingredients in Christmas – chocolate. Nestle's Chocolate specifically.

I don't think Shorty Rogers wrote any Christmas tunes. But he did like Martians and Saturnians and other astral creatures. Sleighs are part of Christmas so why not Saturnian Sleigh Ride? A la the Ventures, the intro is a rip-off of Leroy Anderson's Sleigh Ride. That phrase reappears a few times. I guess Saturians are a little sneaky.

The album ends with an all-out version of Carol of the Bells created by Randy. The beginning is pretty standard, but then a Jazz Messengers influence takes over. That gives way to a solo section with some interesting and fun changes and blowing over some creative backgrounds. Really creative writing by Randy.

This recording project was fun. Hopefully it will bring a smile to your holidays and make them more enjoyable. Maybe it will at least get you through the Wal-Mart.

If you got this far and are looking for the secret code, here it is - “ChristmasCool”