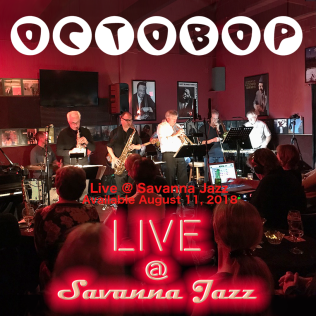 CD Baby, iTunes, Spotify, and everywhere else you get your cool music 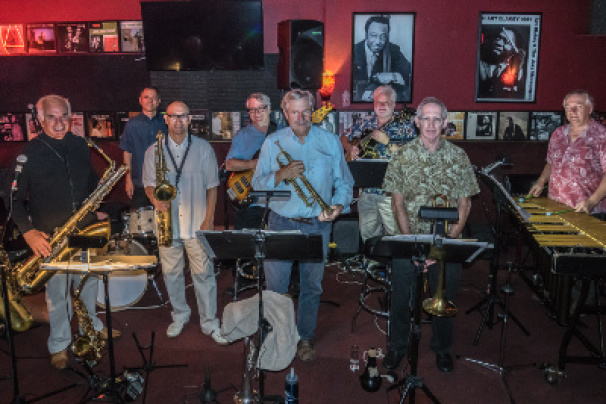 Special Thanks to Pascal Bokar, Vicki Lawlor, and everyone at Savanna Jazz

This album could not have been possible without Stephen Hart. Having worked with musical greats, we are honored to have him make this possible. Pascal Bokar and Vicki Lawlor at Savanna Jazz provided the venue, encouragement, and a few adult beverages. Teresa Anthony contributed the artwork. The audience support, led by unofficial cheerleader William Andrejko, helped fuel the energy. Finally, immense thanks to our families for their support, encouragement, love, and giving up all that time to create the music you hear here.

Welcome to Live At Savanna Jazz. With 6 CDs and almost 20 years behind us, I have always thought the band was better live than in a recording studio. The energy, humor, fun, and elusive sense of swing always seemed better feeding off an audience. When it became time to create this CD 7, doing it live seemed like the only choice. We enlisted two co-conspirators, Stephen Hart, recording engineer extraordinaire, and Pascal Bokar of Savanna Jazz, and the results are here.

An inherent danger exists doing a live recording. Not only are the technical challenges daunting, little chance exists to fix any musical flaws. What you hear is what happened. Jazz isn’t about being perfect. Jazz is about taking risks, being creative, and creating an emotional response. Hopefully we do some of that here.

Octobop leans heavily on the traditions of West Coast Jazz from the 1950s for its inspiration. That doesn’t mean you will hear only tunes from that era. We take music from everywhere and make it our own. All of the selections here were composed, arranged, or adapted by members of the band.

The set that night in January 2018 was a mix of jazz standards, pop tunes, and a few surprises. Tanga by Dizzy Gillespie has been our opener recently and Frank gets the energy flowing. Nostalgia in Times Square from Mingus creates the feeling of being stuck in a traffic jam in that area at 2am. Brian, Randy, and Jon help navigate the way to safety. For One Note Samba, Jack uses the different colors of the ensemble on a great Jobim tune. Strayhorn’s Chelsea Bridge is a classic that showcases Eric. Bob Brookmeyer created a great arrangement of King Porter Stomp for an octet and we adapted that arrangement for our lineup. Dave contributes the opening on vibes and sets the pace for the band. Little Did I Dream by Dave Frishberg showcases the west coast jazz influences on the band. Brian turns Get Happy into a romping samba. Sorta Blue continues in the west coast style with Dave’s vibes honoring the coolest detective around, Peter Gunn, with music by Henry Mancini, of course. The Mooche brings early Ellington to the bandstand and shows how timeless his music is.

This band gives us the opportunity to try new music and grow as writers.

Jack describes Homage as what would result if Bach would write a tango. Jack wrote Linda’s Waltz for his wife Linda Lococo. Randy’s original Theme for an Imaginary Sitcom has a deceptively simple melody placed on top of a harmonic structure that one could find in Coltrane’s music.

Every Octobop gig turns up something unexpected. Not many bands cover Allman Brothers songs. Our version of In Memory of Elizabeth Reed shows what might have happened if Wes Montgomery, DIckie Betts, and George Gershwin hung out in a bar one night. Following that with a tune recorded by Mariah Carey seems even more untraditional. The Wind was actually written by west coast pianist Russ Freeman and recorded by Chet Baker, Bud Shank, June Christy, and others. Our version draws on all those influences.

We had intended to close with the theme to Dick Clark’s American Bandstand, Bandstand Boogie. But with some encouragement from the audience, we added Figure 8 by Lennie Niehaus at the end, bringing us full circle back to our west coast jazz roots.

We hope this sampling of Octobop live brings you enjoyment and lights up your day. Remember, stay cool always.